Those two words – Cabbage, and Soup – are usually enough to strike fear into the most courageous hearts. Fear not dear reader.

In Britain it’s most commonly eaten with disdain as an accompaniment to a Sunday Roast, boiled to destruction. It doesn’t have to be that way. This recipe makes cabbage a thing of wonder.

I took a generous slug of vegetable oil (around 3 tablespoons). Into it, on a medium heat, I added a large chopped onion, covering the pan as it softened for 5 minutes and stirring occasionally. Then I added a couple of cloves of garlic finely chopped and half a teaspoon of caraway seeds (use cumin instead or a teaspoon of mixed herbs – whatever you have), stirred and covered again. I took off a few outer leaves and set them aside, then I finely chopped the rest of the cabbage and added it to the pot, stirred and covered.

When I made this dish again recently, I had some left over roasted carrots and parsnips in the fridge, so added them to the mix. Why not? 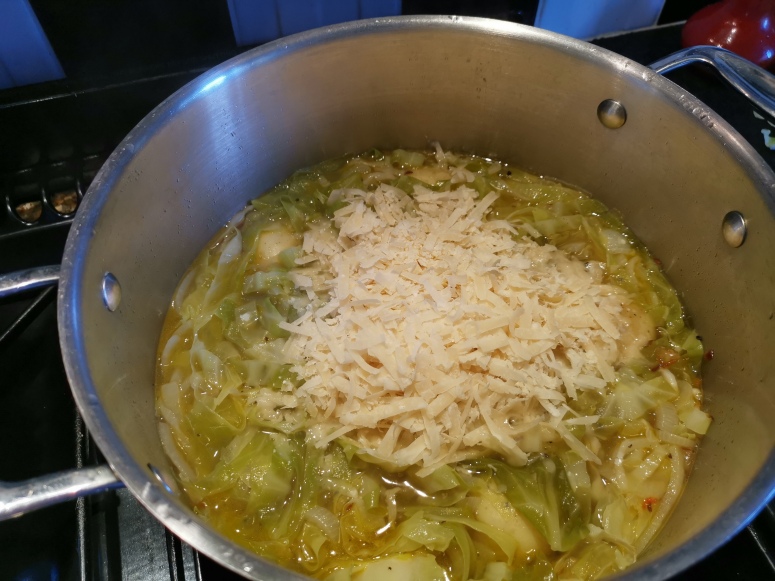 After a couple of minutes, I added some vegetable stock and 3 to 4 salad potatoes (or one large potato), and enough liquid to almost cover the veg. Up went the heat, on went the lid, and I let the pot bubble and simmer for around 12 minutes.

Now, grate as much as you can off two ends of parmesan, and add that, stirring to melt it. It came to roughly three heaped tablespoons of grated Parmesan. Check in the ends of the cheese, cover the pot and let it simmer again. You can substitute any hard cheese you have to hand.

While that was happening I finely chopped the outer leaves, having removed the sturdy central vein, along with a large red chilli and a clove of garlic. Into a pan with some oil I chucked the finely chopped cabbage, adding some rock salt. As it began to brown, I tossed in the garlic and chilli, and then switched off the heat. 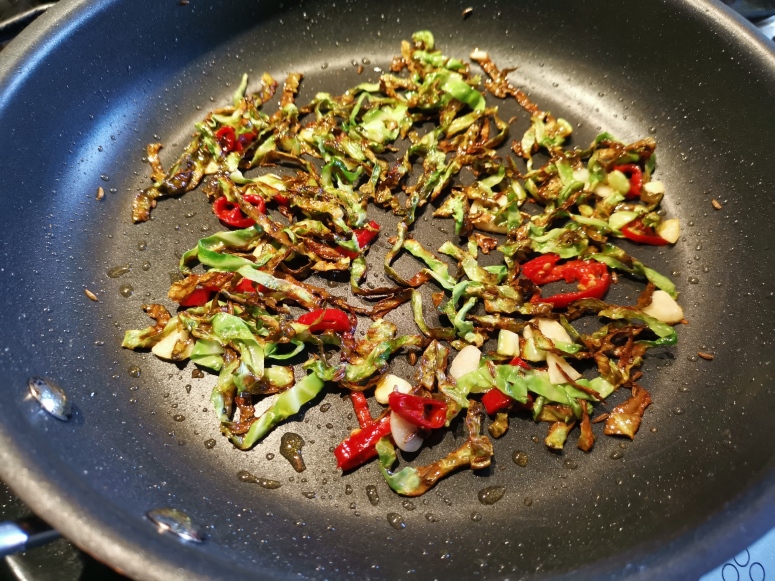 After a few moments’ rest from the heat, I fished out those parts of the parmesan end that hadn’t been absorbed, and then blitzed the soup with a hand -held blender.

Serve the soup topped off with the crisp cabbage, red chilli and garlic and a side of toasted bread.